If The NFL isn't bringing people together, KISS sure is... Long Live Rock N Roll!!

I Still Wanna Rock and Roll all Night and Party Everyday!!!! 40 plus years later... You know the old phrase 'If it ain't broke, don't fix it' Paul Stanley and Gene Simmons figured out what worked years ago and rarely stray from the formula, why would they. I mean what would they do a KISS acoustic show? There was no opening band, at this point in their career if a band opens up for them it would be because Paul and Gene wanted them to open. Like here ya go, band, that no one

Growing up with Mötley Crüe in My Walkman... From New Orleans to New York!

One of my dreams as a kid was to hang out with and tour with Vince Neil of Motley Crue... I did that and more.

Dallas Cowboys take a Knee before Anthem and then stood tall locked in arms for the Anthem.

Not so fast Cowboys Nation Read this before you start yelling boycott the Cowboys... VIDEO: HOF owner joined his players taking a knee before the anthem, then standing and interlocking arms. Sports+PLUS Earlier Monday the Cowboys were discussing how to make “a statement of unity” for the Monday night National stage game. They did so by locking arms as a team, along with the Jones family, and took a knee for a brief moment to PRAY before the National Anthem. The entire team a

Statistically Dak has had much better games since winning the job of starting QB of America's Team. He has completed more passes and thr

Dallas Cowboys may be planning unity statement before Monday's game? 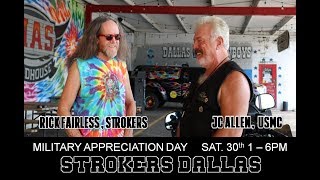 Post Malone shows Noisey Raps around his LA house and addresses misconceptions about him as a rapper. Claiming that you're a "rock

Shayanna Jenkins-Hernandez, who was engaged to former New England Patriots tight end Aaron Hernandez, has filed a lawsuit against the Patriots and the NFL in the midst of Hernandez's diagnosis of chronic traumatic encephalopathy (CTE). According to the lawsuit—obtained by CNN and provided to Bleacher Report—Hernandez was diagnosed with Stage III CTE, which is typically seen in deceased players with a median age of 67. The Boston Herald's Bob McGovern shared two pages from the

Week 3: Previewing the Arizona offense and how the Dallas Cowboys will contain the Cardinals

Sean Lee will lead the redemption effort and ensure a Dallas victory After the Dallas Cowboys suffered an embarrassing loss last week, they enter this week with an extra day of practice and rest. They travel to face the Arizona Cardinals on Monday night. Let’s examine the Cardinals offense. Quarterback Carson Palmer is coming off of an underwhelming performance against the Colts in week two and now shifts his attention to the Dallas Cowboys defense. Carson Palmer has faced th

His work here on Rockstar is certainly evidence of a Megastar. He's NOT going anywhere and certainly not going to listen to a “Professio
1
2

Did James Gunn Deserved to be Fired ?

Tammie Jo Shults, Pilot of Southwest Flight 1380: 5 Fast Facts You Need to Know about this Hero!

Finding the Truth Beyond the Tweets of Ariane Bellamar, Jeremy Piven is Innocent

Federal Complaint Filed Against Roger Goodell and the NFL by Dallas Cowboy Fan!

Have You Connected the Dots in the Ezekiel Elliott Case Yet? Hookers, Corporate Espionage, Vegas, Ra

Did James Gunn Deserved to be Fired ?

Dez Bryant and Odell Beckham Jr. on the same Giants team would 'be crazy'

Tammie Jo Shults, Pilot of Southwest Flight 1380: 5 Fast Facts You Need to Know about this Hero!

Finding the Truth Beyond the Tweets of Ariane Bellamar, Jeremy Piven is Innocent

Federal Complaint Filed Against Roger Goodell and the NFL by Dallas Cowboy Fan!

Have You Connected the Dots in the Ezekiel Elliott Case Yet? Hookers, Corporate Espionage, Vegas, Ra

The Twists and Turns of The Conspiracy Case Against Ezekiel Elliott, Jerry Jones and The Dallas Cowb

Peyton Manning’s squeaky-clean image was built on Honor and Trust! Jamie Naughright calls me and cla